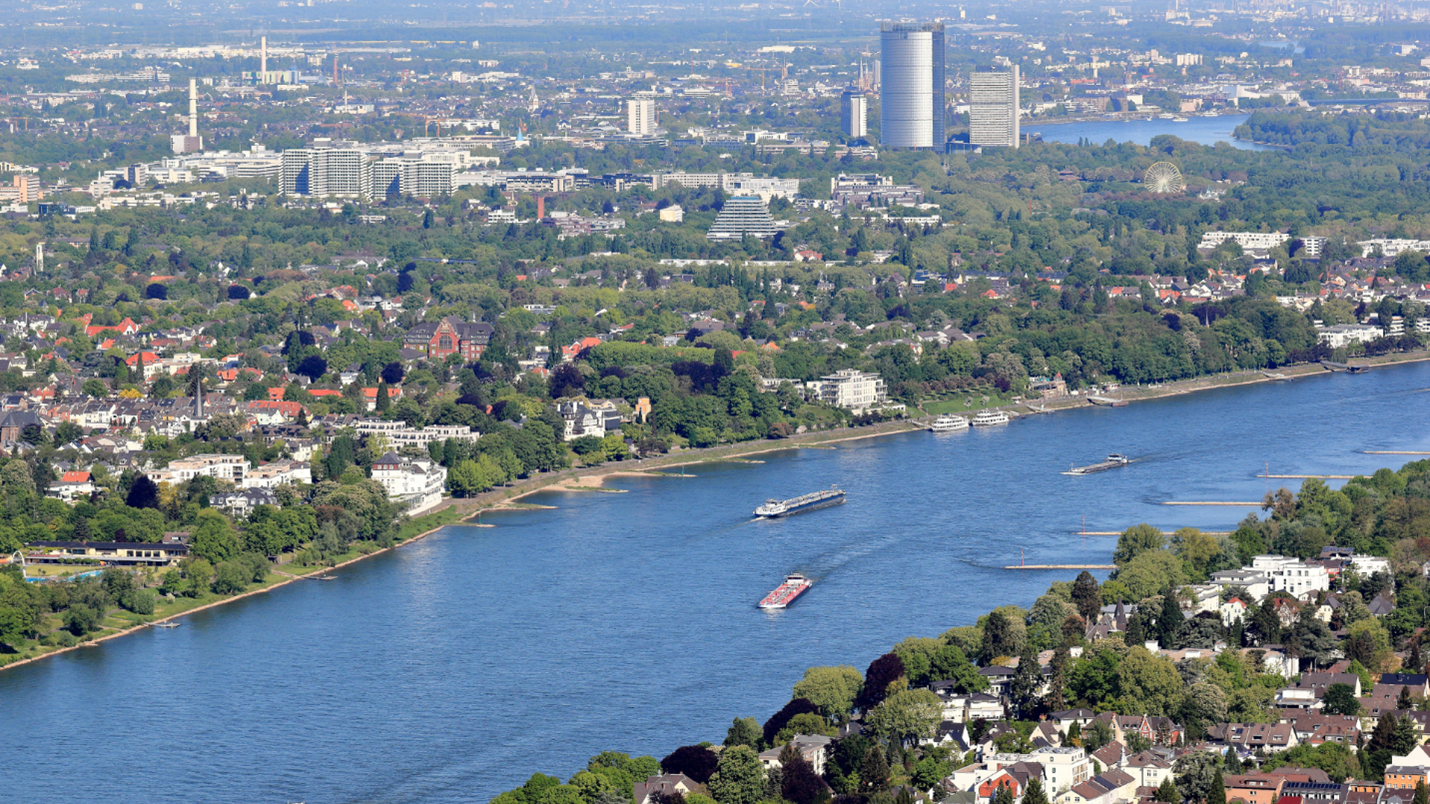 Urban areas are growing tremendously. The United Nations estimates that almost 70% of the global population will live in urban areas by the year 2050. At the same time, extreme weather events such as heatwaves get more frequent due to climate change and the impact of heatwaves is most severe in densely populated areas with high ratios of concrete leading to the well-known heat island effect.

When considering different measures, it is important to reflect on vulnerable and economically marginalized groups as they are most susceptible to future hazards. This notion is also reflected in the definition of urban resilience, which can be interpreted as: The capacity to maintain the functioning of urban systems ensuring that all people who live and/or work in the area, particularly the poor and vulnerable, survive and thrive no matter what shocks are encountered (drawing on the Rockefeller Foundation and ARUP 2014).

Let us take a look at my current place of residence – Bonn, Germany, and how it could be affected by different hazards. Bonn is a federal city with approximately 330,000 inhabitants located by the river Rhine. As for most of the cities worldwide, it consists of wealthier, like Bonn Altstadt, and economically weaker districts, like Bonn Tannenbusch. As previously mentioned, it is important to give special importance to economically marginalized groups since they are generally more vulnerable.

The inhabitants of Bonn Tannenbusch are likely to be more susceptible to heat waves due to the lack of private gardens and air conditioning. Further, public and green spaces are available but not too widespread and not always possible to reach without (public) transport. Especially in the face of the current pandemic, the importance of public areas for psychological health became even more apparent.

Air pollution is not a major threat but could be enhanced in some parts of Bonn. Another major threat is flooding. In the winter months and during snowmelt season, the Rhine frequently overflows its banks. During floods, streets and houses in the districts of Bonn Mehlem (on the left bank of the Rhine) and Beuel (on the right bank of the Rhine) are particularly exposed. At the moment, these areas are relatively well-prepared as there are floodplains and dikes. However, as the meteorological events will intensify with climate change, a steady enhancement of adaptation measures will be necessary.

The global commitments that need to be considered, including the Sustainable Development Goals (SDGs) and the targets of the Sendai Framework for Disaster Risk Reduction (SFDRR), will be described in the following sections.

For the assessment of the chosen infrastructure sector of ecological infrastructure, I have consulted the resilient cities index within the resilient city framework published by the Rockefeller Foundation and ARUP in 2014 and the International Union for Conservation of Nature and Natural Resources (IUCN)’ Global Standard for Nature-based Solutions of the year 2020.

The resilient city framework published by the Rockefeller Foundation and ARUP was chosen as it reflects on a broad range of approaches and includes learnings from literature, case studies, and cities themselves. It provides an overview of the qualities of resilient systems which include robustness, resourcefulness, redundancy, reflectiveness, flexibility, inclusiveness, and integration. These qualities helped me in a first step to think broader and identify possible gaps in the resilience of Bonn’s city system and to order the previously mentioned challenges.

These could be then further refined and categorized by the framework’s four categories: “the health and wellbeing of individuals (people); urban systems and services (place); economy and society (organisation); and […] leadership and strategy (knowledge)” (The Rockefeller Foundation and ARUP 2014, p. 8).

The four categories consisted of 12 indicators, which help to give a more holistic expression of the resilience of a system. The framework picturizes this as the city’s immune system. In this way, the framework nicely explains each of the indicators, which makes it easy to apply them into the context.

The IUCN Global Standard for Nature-based Solutions (NbS) provides a user-friendly framework for the verification, design, and scaling up of NbS. NbS involves established practices such as ecosystem-based adaptation (EbA) and mitigation, and ecosystem-based disaster risk reduction (Eco-DRR), which can be seen as a crucial part of ecological infrastructure. The IUCN has developed the standard to ensure a grounded and consistent use of available and applicable solutions.

The Standard consists of eight criteria and 28 indicators, which are all interconnected. In my opinion, the IUCN Standard is slightly more complex and broader than the Resilient City Framework. In many points, it is similar to the Resilient City framework. For example, its criterion five: “NbS are based on inclusive, transparent and empowering governance processes” is contentwise closely related to the category of Leadership and Strategy of the Resilient City Framework; however, it highlights points from different angles; thus, it helps for a more comprehensive assessment (IUCN 2020).

The big advantage of ecological infrastructure is that its enhancement has several beneficial effects on other infrastructure sectors as well. An increased tree coverage for example, if located at the right places, can support the water infrastructure. It reduces the surface run-off keeping the water in the area which in turn is favourable for the water table and quality in Bonn in the long term. Thus, it assists also in coping with more frequent drought periods.

This goes along with indicator eight: “Continuity of critical services” of the Resilient City Framework. Moreover, an enhanced coverage of trees would also help with the threat of flooding in the winter months and during snowmelt upstream when the Rhine frequently overflows its banks. As mentioned above, at the moment Bonn is relatively well-prepared. However, as the meteorological events will intensify, a continuous improvement of adaptation measures will be needed; thus, increasing the tree and shrub coverage in the floodplains with adequate tree species would help to prevent major flood disasters in the future. This is in line with the requirements of the seventh indicator of the Resilient City Framework to decrease physical exposure and vulnerability.

Enhancing the ecological infrastructure in currently disadvantaged areas of Bonn, such as Bonn Tannenbusch, could contribute to the coping with the heatwaves as they give shelter when the habitants' flats are getting too warm due to the lack of air conditioning. This would also enhance the overall local climate and thus, as required by the seventh indicator of the Resilient City Framework, decrease physical exposure and vulnerability.

The decision process on the ecological infrastructure project and its design would need to be participatory and gender-sensitive to meet the needs and wishes of the local inhabitants. An active participation process could enhance the active community engagement, social integration, and strong social networks as it is raised under the fourth indicator: “collective identity and mutual support” of the Resilient City Framework. This also stands in line with indicator 11: “Empowered stakeholders” and indicator 12: “Integrated development planning” and criterion 5: “NbS are based on inclusive, transparent and empowering governance processes” of the IUCN Standard.

This might be especially beneficial due to the diverse cultural backgrounds of the inhabitants in Bonn Tannenbusch. Respecting the ideas and wishes of the marginalized would strengthen their capacities and therefore would reduce underlying human vulnerabilities, which is enshrined by indicator one: “minimal human vulnerability” of the Resilient City Framework.Furthermore, ecological infrastructure projects can enhance the resilience of Bonn as well through reducing the exposure to air pollutants such as nitrogen dioxide, especially along the streets with a high traffic occurrence such as the Konrad-Adenauer-Allee. This would enhance indicator eight of the Resilient City Framework as it ensures the continuity of the critical service of clean air.

In comparison, other climate-friendly infrastructure projects rather just reduce the emissions but do not sequester carbon, which will be necessary to stay within the targeted 1.5°C range necessary to avoid major disruptions of the global systems.

Like this, ecological infrastructure projects in Bonn can contribute to several SDGs, especially: 3, 5, 6, 9, 10, 11, 13, and 15. In addition, it contributes to the SFDRR target to reduce direct disaster economic loss in relation to the global gross domestic product by 2030. Through the reduction of greenhouse gases, it also can contribute to climate change mitigation and would therefore have a positive effect on the other targets and goals.

Depending on the focus of the ecological infrastructure project, a range of different regional state offices should be included. In nearly every case the city’s urban planning office would need to be involved to ensure alignment and conformity with other development plans.

Regarding the reduction of air pollution through ecological infrastructure, botanists would need to be consulted to identify the most adequate plant species for the project. To identify and prioritize air-polluted areas, the State Office for Nature, Environment and Consumer Protection (LANUV) would need to be consulted, which also has the responsibility for monitoring air quality and informing the public. The state-wide air quality monitoring system currently comprises more than 70 fixed and mobile measuring facilities.

In Bonn, the LANUV continuously measures air pollution levels at fixed measuring stations, where it carries out air pollution measurements for nitrogen dioxide with passive samplers. Like this, it would be possible to evaluate the effect of the ecological infrastructure project under the Bonn Clean Air Plan to reduce air pollution levels (bonn.de 2021).

Regarding ecological infrastructure projects in Bonn Tannenbusch, it would be advisable to get in touch with local initiatives, such as the Bildungswerk Interkultur or the Tannenbusch Haus, which want to empower people to “create their own and our common future in an inspiring, protected and empowering atmosphere, learning from and with each other.” (tannenbuschhaus.de 2021).

These institutions are already well-linked to the local inhabitants and can help to set up the participatory process.

Regarding flood protection as a purpose of increased ecological infrastructure, for example, the city of Bonn, the HochwasserKompetenzCentrum e.V, which supports Bonn citizens in taking precautions against floods and heavy rain, and the environmental office should be consulted. This helps to identify the areas which are the most exposed to flooding and to effectively synchronize the ecological infrastructure project with other plans and initiatives.

In face of climate change, it might further be favourable to engage with local organizations focusing on fighting climate change to enhance the movement’s success and to mainstream these efforts.

As Bonn has a strong academic infrastructure with several universities and institutes, it would be recommendable to back the planning and implementation processes with scientific expertise also to further enhance the understanding of this seminal development in making our cities more resilient.

Fabian Rackelmann is a student of the joint Master's program Geography of Environmental Risks and Human Security offered by the United Nations University (UNU-EHS) and the University of Bonn. He holds a Bachelor’s degree in Ecosystem Management from the University of Göttingen.