Critical infrastructure supporting transport, power, telecommunication and water supply are essential for quality of life and livelihoods as our everyday tasks depend heavily on their reliable and secure operations. But unsafe infrastructure can cause severe consequences for people and economic activities, especially when exposed to the rapidly increasing threats of climate change and natural hazards.

In recent years, we have become increasingly accustomed to scenes of ravaged roads, damaged power and telecommunication networks and disrupted water supplies following a disaster. Such scenes in the aftermath of disasters continuously remind us that our infrastructure systems are not robust enough to withstand the impact of such events.

Why Invest in Resilient Infrastructure?

Natural hazards not only disrupt transport networks and power plants but also cause indirect impact on the economy and the population at large in the form of disruption to businesses and critical supply chains like food services, healthcare and education. Over the last two decades, disasters have caused an estimated direct economic loss of over US$2.5 trilliion—more than the gross domestic product (GDP) of many developed economies, such as Australia, Canada and Italy. Recent catastrophic events have shown us that economic losses in critical infrastructure sectors alone can account for more than 60 percent of the total direct economic losses caused by a disaster.

The direct losses to critical infrastructure can cause indirect or spillover effects for the population and economy at large. For example, failure of road networks could hinder supply of emergency services to the affected population; rebuilding or repair costs to damaged infrastructure could result in additional fiscal burden, forcing the government to divert money from other social welfare and poverty reduction schemes. Because of interconnected infrastructure systems, the indirect losses due to disasters could be more than 10 times higher than direct losses, particularly in low- and middle-income countries.

“…disruptions caused by natural hazards, as well as poor maintenance and mismanagement of infrastructure, costs households and firms at least $390 billion a year in low- and middle-income countries” Lifelines (World Bank 2019)

So, does it make sense to invest in resilient infrastructure? Evidence certainly suggests so. A recent World Bank report indicates that one dollar invested in resilience could save four dollars in post-disaster scenarios. And it would only cost a mere three percent more than the overall investment to increase the resilience of infrastructure. Furthermore, investment in resilient infrastructure is not only about building structures; it will also unlock several economic opportunities for people which can help achieve better outcomes in health, education and livelihoods.

The world currently faces a significant shortage of investment in infrastructure and financing the same is not going to be an easy task. If we go by current trends, there could be a shortfall of $15-20 trillion in the estimated worldwide infrastructure demand of $94 trillion by 2040, and post-COVID-19, this gap could be even wider.

Governments alone cannot cater to the demands of resilient infrastructure, which makes the involvement of the private sector vital in financing such demands. However, the contributions of the private sector in public-private partnership (PPP) infrastructure have dropped significantly in the last few years. According to the Global Infrastructure Hub, private investment through PPP in 2019 has been about $30 billion, down from $55 billion in 2010. 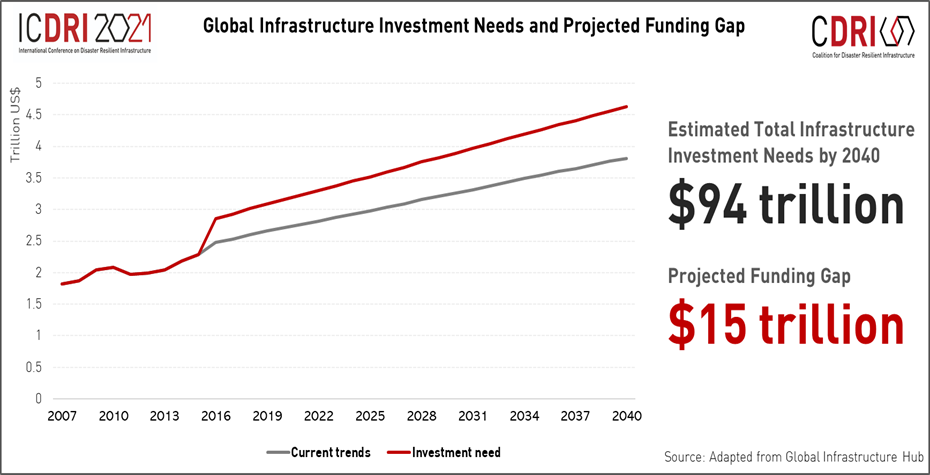 A Window of Opportunity

We have been aware of the infrastructure funding gap for quite some time now. We also have existing expertise and capacity in the private investment and insurance space to meet these demands. Why are we still not able to bridge the funding gap? It is high time for us to  try to bridge this funding gap by creating avenues and appropriate incentives (e.g., tax rebates) for greater public-private partnerships.

Ironically, funding to finance infrastructure investment demands is available. There is an estimated $106 trillion of untapped private institutional capital worldwide, yet only 1.6 percent of it is invested in infrastructure, which makes the financing of resilient infrastructure an even more challenging task. Therefore, public and private stakeholders need to collaborate to mobilize this funding to boost infrastructure resilience.

The newly formed Coalition for Disaster Resilient Infrastructure (CDRI) and other development partners can greatly help governments streamline funding towards resilient infrastructure through needs-based technical studies, improved data analytics for risk-informed decisions and events and initiatives that bring public and private stakeholders together.

If we ignore the rising frequency and intensity of natural hazards and do not prevent them from turning into disasters by investing heavily in resilient infrastructure, we cannot ensure that our communities stay safe and secure in the face of potential disasters coming our way. Now is the time for action.