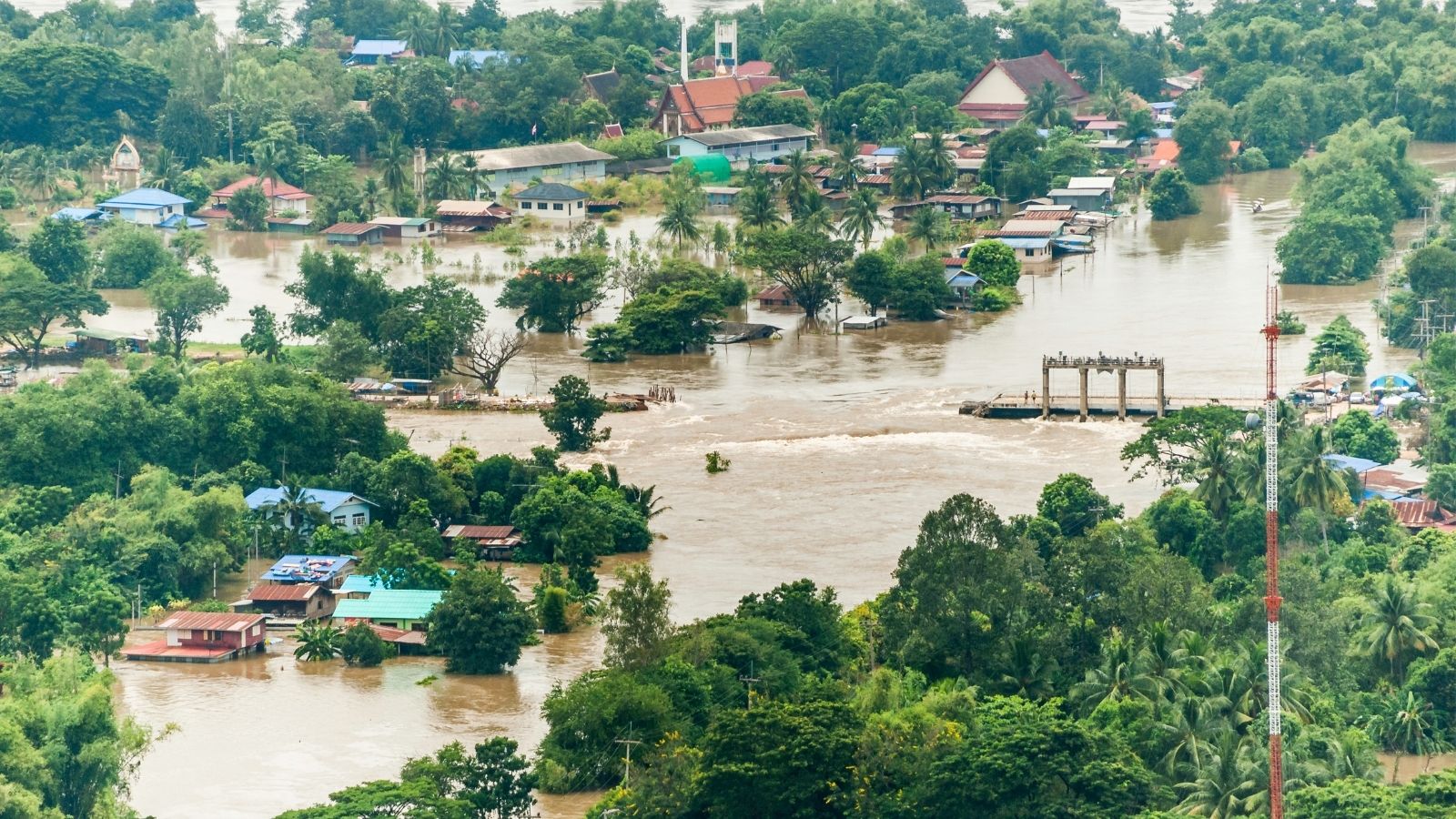 A person in the Asia-Pacific region is four times more at risk of natural hazards than a person in Africa and sixteen times more than someone in North America or Europe. The “riskscape” of the region stems not only from its inherent natural, biological and environmental hazards but also from socio-economic vulnerabilities and rapid urbanization. In this region, exposure to climate events increases inequality, as measured by the Gini coefficient, by 0.24 percentage points. Further, a 1 percentage point rise in exposure to climate hazards increases the under-five mortality rate by 0.3 percentage points and decreases education rates by 0.26 percentage points. Almost 40 per cent of disaster impacts affect social sectors, including health, education and livelihoods, resulting in deeper inequalities of opportunity transmitted over generations. In recent years, climate risk is outpacing resilience measures while the root causes of this risk remain unaddressed.

Indeed, building resilience is the common thread across all goals of the 2030 Agenda for Sustainable Development. The Sendai Framework for Disaster Risk Reduction (2015-2030) has marked a paradigm shift from managing disasters to managing risks. The Paris Agreement under the United Nations Framework Convention on Climate Change (2015) has been an effort to fundamentally address climate risk by coupling adaptation and mitigation through pathways backed by strong political commitment. In this context, the UN Climate Change Conference (COP26) in November 2021 provides an opportunity to move forward.  Three key points from an Asia-Pacific regional perspective are highlighted below:

The Sixth Assessment report of the Intergovernmental Panel on Climate Change (IPCC), Climate Change 2021: The Physical Science Basis, presents new scenarios with greater certainty to understand the changes taking place in climate extremes and their attribution to human influence. This is a step forward from the Fifth Assessment Report. Using the latest Sixth Coupled Model Intercomparison Projects, it offers improved knowledge of climate processes, paleoclimate (geologic and biologic) evidence and response of the climate system to increasing radiative forcing (the difference between incoming solar radiation and outgoing terrestrial radiation) as well as a best estimate of equilibrium climate sensitivity of 3°C. To bridge the science and policy gaps, the report uses Shared Socio-economic Pathways to describe “five broad narratives of future socio-economic development” from potentially below a 1.5°C best-estimate warming scenario to more than 4°C warming by 2100. One of the key highlights of the AR 6 is that the difference between 1.5 and 2 degrees of global warming is substantial: every fraction of a degree translates into increased risks. For example, every additional 0.5°C of global warming causes clearly discernible increases in the intensity and frequency of hot extremes, including heatwaves (see figure). The report concludes that it is still possible to achieve the 1.5-degree-target but only if unprecedented action is taken now. The fundamental of coupling adaptation and mitigation lies in limiting warming to 1.5 degrees, ensuring that global emissions are halved by 2030 and ‘net-zero’ is achieved by 2050.

Fig.: Projected changes in the intensity and frequency of hot temperature extremes over land in drying regions 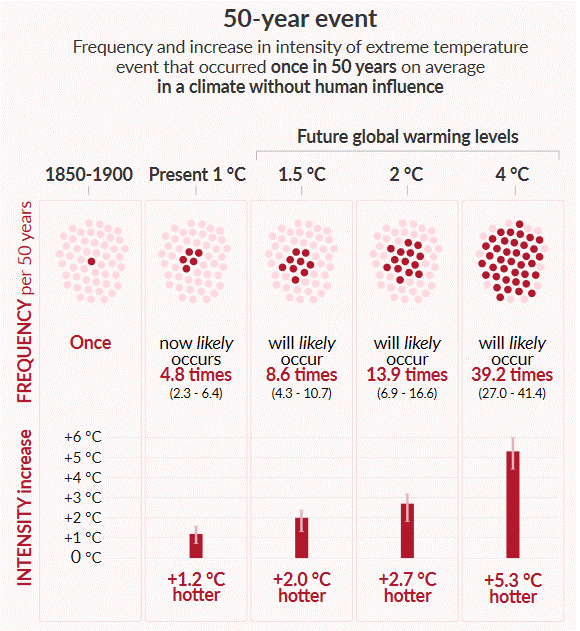 Adaptation is half of the climate equation

UN Secretary-General António Guterres calls for 50 per cent of climate finance to be spent on building resilience and adapting to a warming world. ESCAP estimates the total climate adaptation costs for cascading hazards (natural and biological) under an extreme climate change scenario at US$ 270 billion for Asia and the Pacific, which is around 20 per cent of the estimated annualized average loss.  The highest cost as percentage of GDP is recorded in the Pacific small island developing States with 9.1 per cent in Vanuatu and 7.4 per cent in Tonga. Given the specific riskscape in this group of countries, their adaptation priorities include making water resource management resilient and improving dryland agriculture crop production followed by protecting mangroves, strengthening early warning systems and making new infrastructure resilient. These five measures can also be examined vis-à-vis the riskscape at country level to plan targeted adaptation investments for high cost-benefit. For instance, the top three adaptation solutions for Vanuatu include improving dryland agriculture crop production, resilient water resource management and protecting mangroves. This can be attributed to high exposure to drought along with a large share of the employed population working in the agriculture sector in Vanuatu, which is also the case for agrarian economies of developing countries such as Bangladesh, India, Indonesia, Nepal and Pakistan.

Raising climate ambition is key for building a resilient future

The Nationally Determined Contributions (NDCs) submitted in 2015 were collectively not ambitious enough to keep global warming ‘well below’ 2 degrees compared to pre-industrial levels. COP26 is the first test for this ambition-raising function and many are expecting to see new NDCs ambitious enough to put the world on track for ‘well below’ 2 degrees, preferably to the 1.5 degree-target. However, an analysis of NDCs and intended nationally determined contributions (INDCs) indicates that presently, climate adaptation cost estimates are not in line with the level of risk posed by climate related and biological hazards.

The success of COP26 will be a decisive moment not only in addressing the climate risk but also in breaking the links between poverty, inequality and extreme climate events, especially in developing, least developed and Pacific small island developing States. It’s time to raise climate ambitions to determine how resilient the world would be in 2050.

Sanjay Srivastava is the Chief of Disaster Risk Reduction at the UN Economic and Social Commission.