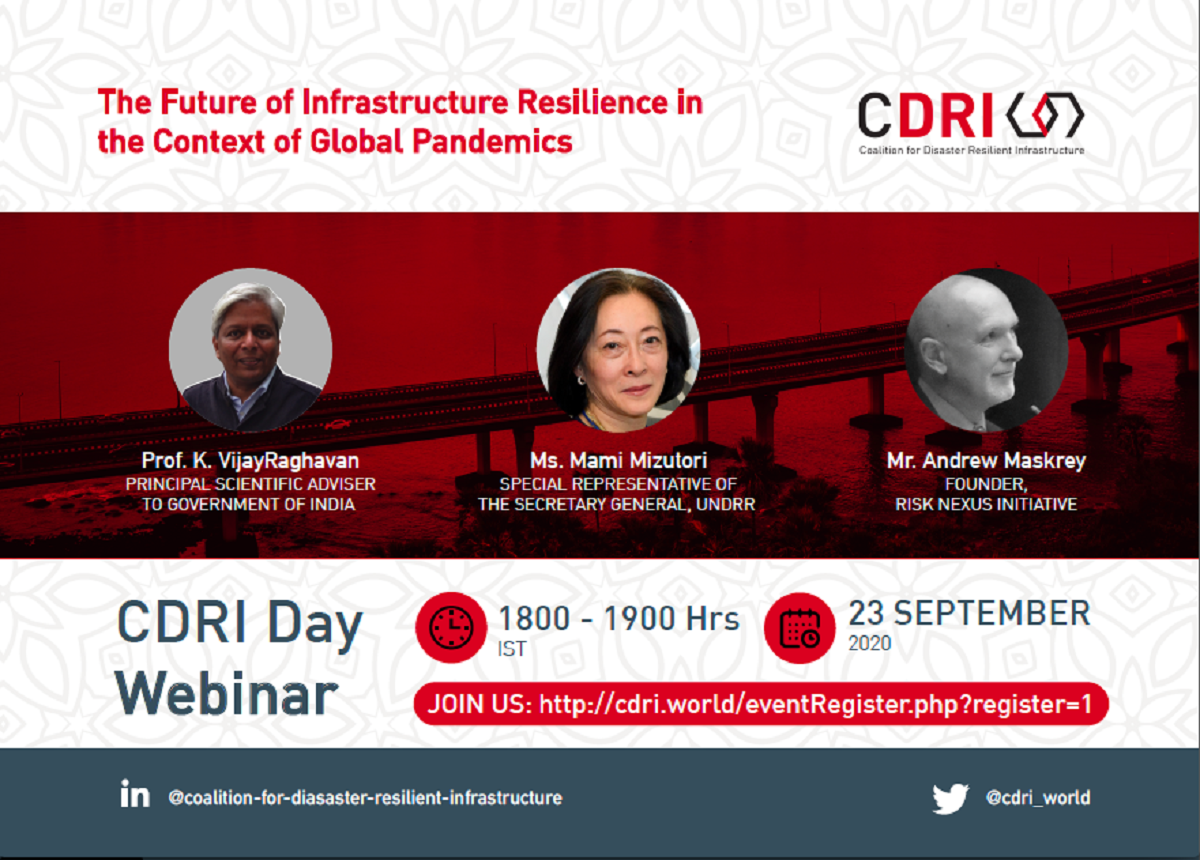 NEW DELHI, 23 September 2020 – Launched one year ago at the UN Climate Summit in New York City, the Coalition for Disaster Resilient Infrastructure (CDRI) has grown to include 16 countries and three multinational organizations with three others in the process of joining this global partnership to promote resilience of new and existing infrastructure systems to climate and disaster risks.

“Never has our cause to advance resilient infrastructure in the face of ongoing, devastating disasters and climate conditions been greater,” said CDRI’s Governing Council Co-Chair, Dr. P. K. Mishra. “We look forward to welcoming more countries, like-minded organizations and institutions as members to strengthen the Coalition, which over time will help keep us all safer and increasingly resilient.”

CDRI marked its anniversary Wednesday by conducting the Coalition’s first webinar, “The Future of Infrastructure Resilience in the Context of Global Pandemics.” Speakers included Mami Mizutori, Special Representative of the UN Secretary General and head of the UN Office of Disaster Risk Reduction (UNDRR), Prof. K. Vijay Raghavan, Principal Scientific Adviser to the Government of India, and Andrew Maskrey, Founder of the Risk Nexus Initiative. The discussion was moderated by Mr Kamal Kishore, Member National Disaster Management Authority, India and Co-Chair of Executive Committee of CDRI.

Within months of India’s Prime Minister Shri Narendra Modi announcing the formation of CDRI on 23 September 2019, partners formed a Governing Council and Executive Committee to guide the Coalition’s activities, starting with infrastructure issues in the power, telecommunications and transportation sectors.

Among its year-one milestones is the CDRI Fellowship Programme. Introduced on 1 September, the Fellowship encourages students, professors, researchers and community workers from CDRI Member Countries (see list below) to apply ideas on how to keep infrastructure resilient to climate and disaster risks. CDRI will award 30 one-year grants of US$10,000 in one year.

“CDRI is an example to the world of how to strengthen risk governance at the global level for more effective management of disaster risk with a particular focus on the critical infrastructure required to support us through the COVID-19 pandemic and the climate emergency. International cooperation is key to addressing these challenges and CDRI is an excellent role model,” said Ms. Mizutori.

On 30 August, the Coalition also started a Power Sector Resilience Study to enhance resilience of power infrastructure in the state of Odisha and eventually inform steps other similar geographic territories could take to cope with disasters, especially those resulting from extreme climatic events.

Looking ahead, CDRI is developing a global study to boost airport disaster resilience and recommend disaster risk management measures in existing and future airports. CDRI has also initiated a biennial “Flagship Report” on Disasters and Climate Resilient Infrastructure focusing on the state of climate and disaster resilient infrastructure, with a specific focus on nature-based solutions. The Report is expected to be released in 2022 with an intermediate output being planned for the Conference of Parties (COP) 26 scheduled next year.

CDRI is a growing partnership of national governments, UN agencies and programmes, multilateral development banks, financing mechanisms, private sector and knowledge institutions that promotes the resilience of new and existing infrastructure systems to climate and disaster risks. Developed through consultations with more than 35 countries, CDRI targets measurable reduction in infrastructure losses from disasters, including extreme climate events like those seen already in 2020.